Wales thrashed Belarus in Cardiff to increase their chances of a home tie in the play-offs, while Belgium and world champions France booked their places in Qatar.

Wales has already secured a spot in the March playoffs to earn a spot in next year’s Qatar finals after winning their Nations League section. However, finishing second in Group E may give them a better chance of getting a home draw.

Real Madrid’s Bale, Wales’ all-time leading scorer, was withdrawn with a calf injury after only half an hour of his 100th appearance.

Wales moved into second place in World Cup qualifying Group E with a 5-1 home win over Belarus on Saturday, with Gareth Bale earning his 100th cap. 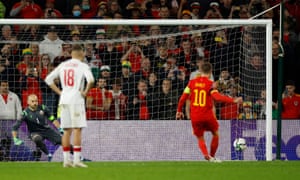 Williams doubled their lead in the 20th minute after being played in by Bale and burying a near-post shot past Chernik.

Ramsey calmly converted a penalty awarded for handball in the 50th minute to become only the sixth player in Wales history to score at least 20 goals, and Davies then bundled in his first goal on his 68th appearance for his country.

Artem Kontsevoi scored a late consolation for Belarus with a dipping shot, but Roberts completed the scoring in the final minute by touching in a Harry Wilson corner.